The End of the World As We Party 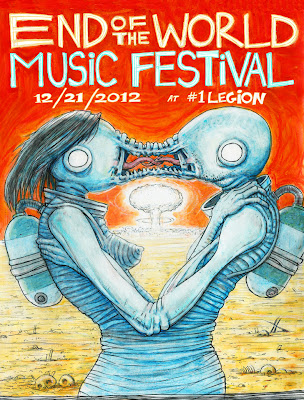 Here's an event that's being staged in Calgary on the 21st of December to provide a "Restaurant At The End Of The World" ambience for 15 local musicians who have been asked to play like it’s their last gig on earth.
Just a few of the featured bands include:

In addition to two stages of rock, pop, blues and metal, the festival also includes:
Event monger Kenna Burima is anticipating that Calgarians will embrace the concept, and attend the event dressed in the spirit of the evening.

“Come as your favourite religious figure, cult leader, alien life form, or check one more thing off your bucket list and dare to express yourself any way you see fit. The audience will be as much a part of the event as the music and art. This is a way to bring us together to ponder the big questions while having a night of great fun. And you could also consider the festival as a great alternative to your office’s stuffy old seasonal holiday party. The timing is right, and the end is nigh.” 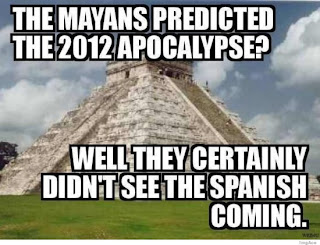 Hopefully, the Second Coming of the Great Prophet Zarquon will be added to the bill (at the last minute).
Posted by Corby's Orbit at Monday, December 03, 2012