Government Set On Changing The Charter Of Rights 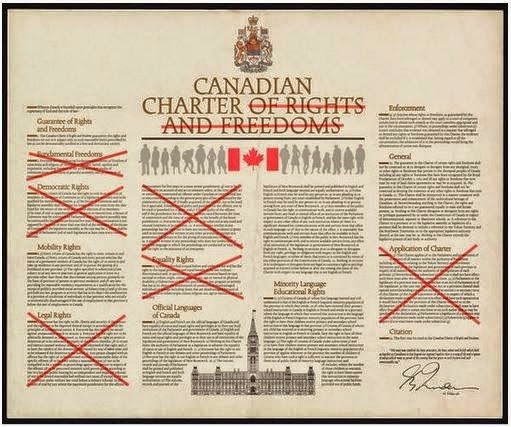 On March 14, people will gather together in communities across Canada to speak out against Stephen Harper's reckless "secret police" Bill C-51.
IN Toronto - Nathan Phillips Square \ 12pm - 2pm
100 Queen St W, Toronto, ON M5H 2N2, Canada.
Experts have pointed out that, if passed, the bill will:
Create a secret police force with little oversight or accountability.
Facilitate government spying and information sharing on Canadians.
Allow for a variety of violations of our Charter Rights.
Despite the severity of this secret police plan the government is trying to ram bill C-51 through parliament in record time.
This bill disproportionately targets indigenous communities, environmental activists, dissidents, and Muslims, many of whom are already subjected to questionable and overreaching powers by security officials. This bill will make it easier and ostensibly lawful for government to continue infringing upon the rights of peaceful people.

Email ThisBlogThis!Share to TwitterShare to FacebookShare to Pinterest
Labels: Freedom