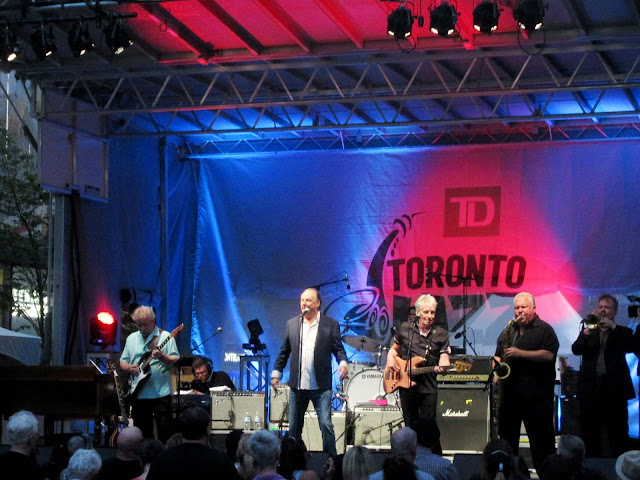 “What a great night to be playin’ the blues, eh?” ~ Chuck Jackson

L.to R.: Michael Fonfara, Paul Shaffer, Donny Walsh, Mike Fitzpatrick, Chuck Jackson, Dan Aykroyd, Gary Kendall, Pat Carey, Pete Jeffrey
The stained alleyways and decrepit staircases that germinated the talent and sustained the weight of Toronto blues history were still pulsing with pungency  just a few blocks south, but on the opening  Saturday night of TD’s Toronto Jazz Festival, Downchild went uptown to the cheers of fans, family, jazz freaks and the filthy rich of upscale host neighbourhood Yorkville Village. While a closed-off Bloor Street West cascaded with tourists and surplus celebrants from that day’s Dyke march and that week’s Raptors bacchanale, hospitality was high-priced, with a beyond-meat burger running to $13 and bottled water bringing in $3 for that evil Nestles. But the throng on the street effervesced nonetheless, with parasols, electric sunglasses, feather boas and at least one live boa constrictor. 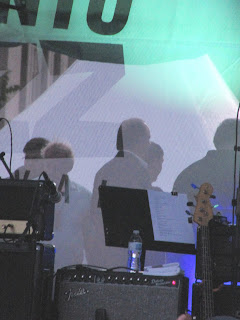 Then the aquiline tones of backstage moderator Dan Aykroyd invited the mixed crowd / human gumbo stew at large, “including families and rainbow friends, to give a big smoke city welcome to the founder of a fifty year legacy of worldwide music and fun: Citizens, I give you one of your own: writer! composer! raconteur! vocalist! guitar-slinger! harp-master! archivist! And the leader of Canada`s blues band extraordinaire and inspiration for the Blues Brothers, Mr. Downchild, Doctor Donny Walsh. And! This! Is! The Downchild Bluuuuues Band.” 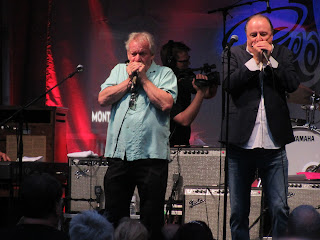 The band summarily kicked out with a tight hour-and-a-half revue of rhythm and moans, shouts and swing, hot-dogging solos and thumping grooves that won over blues wannabes and long time congregants alike with its punch, provocation and sincerity. Politicos were elsewhere. Unlike the other cherry photo ops happening around town, this one was decidedly `for the people` and the mood was mellow and celebratory. 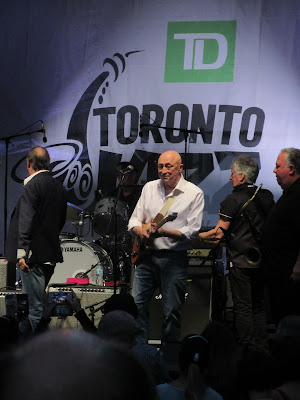 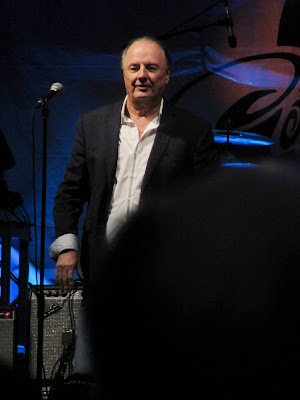 Blues barker Chuck Jackson got the crowd to chant along on a relaxed and swinging Dewdrop Inn, and displayed the variety of his chops on cajun and soul styles along with some supportive harp scorching. 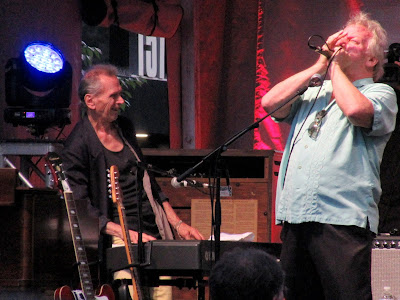 Donny Downchild made the best of his glory moment with lots of easy going slide and frequent amped up solos on the misery whistle. The collective force of Fonfara, Kendall, Neal and Fitzpatrick, with the contribution of consistently funky horn spikes by saxman Pat Carey and trumpeter Pete Jeffrey, 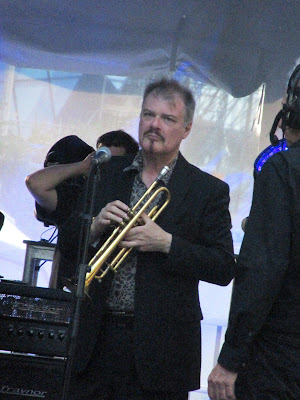 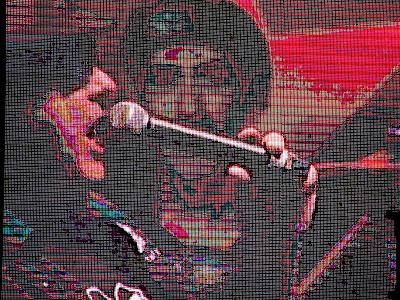 who weighed in with his classic take on Sam & Dave`s Soul Man and the Blues Brothers` expropriated Downchild hit, I`ve Got Everything I Need (Almost). Shrugging his way back and forth across the stage in shades and black fedora, he eventually herded all the players back into the jumbotron spotlight for a rousing finale on Flip Flop and Fly, which crested in high style before the night became casually undone, dispersing an audience of thousands into that vivid dark blueness that every Saturday holds in common. What a great night to be hearing the blues, eh?
Originally published at Roots Music Canada
Posted by Corby's Orbit at Tuesday, July 09, 2019