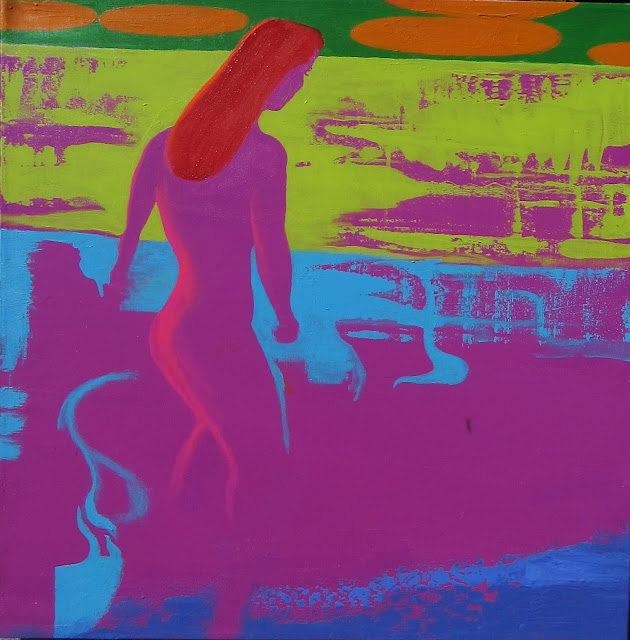 Illustration: Testing The Water by Corby
The Waves, The Wake
(a review of the fine new album by the Great Lake Swimmers in blank verse, with end-notations)
Originally published at Roots Music Canada
Amorphous yet as meaningful as clouds
They swirl in slow motion in the tentative sky
In merge and flow, floral, choral corridors echo
Drew Jurecka non solo in caelis sed in Ontario terra[i]
Blocked meteor showers extinguish anguish
copying the fabric of the ocean’s allure
senses create emotions beyond the flesh
and a pure moment went by when I kissed  you in a wild place. [ii]
Great Lake Swimmers, now,
Turn on their High Beams.[iii]
Crazy lights over the water these days.
Neon shimmers, commas in a horizon,
Acoustic bathing suits and sonar thongs
Moog-y[iv] wings and boogie winds throng,
Like Beck lit some fireworks in a backwards tunnel [v]
A cappella auricles and antic ventricles[vi]
Donate their frantic frames
To banjo flotation devices; spilled blood evaporates.[vii]
Could have sat in cried puddles,
but inside Dekker conspired
Conception.[viii]
Gale force strings waltz in a star cello key,[ix]
Colouring book of piano strategies
Fixed and mixed in a single word,
Unfenced.[x]

[i] Although Drew Jurecka, the applause-winning fiddle player who has filled the Miranda Mulholland-sized hole in Great Lake Swimmers, is not technically a god, his orchestration on “The Talking Wind” is truly beneficent.
[ii] Many of the images in the lyrics hinge on elliptical sensory and sexual references that viscerally underpin the more spiritual tone of the music.
[iii] The “roots” quality of the band’s previous output has taken a swerve skyward with this trance-able summery foray into a more ethereal aesthetic.
[iv] Although no Moog synthesizer is actually credited, the celestial wobbliness of its tonality permeates the record, through the combined agencies of harp, cello, vibraphone, pedal steel and flute.
[v] Beck’s Grammy-winning 2014 album Morning Phase could have served as a template/touchstone for Chris Stringer’s production values on The Waves The Wake.
[vi]Centerpiece of the record is a tune called “Visions of a Different World,” which reverberates with voices alone. “Love is our only weapon, our only defense.”
[vii] Eric Arnesen brings a banjo to bear on “In a Certain Light” creating a melodic rather than rhythmic fabric with which to buoy the song.
[viii] Swimming coach and lyricist Tony Dekker, although positive and forward-looking throughout the album, maintains an effective but steadfastly melancholy tone that seems to be a part of his vocal DNA.
[ix] Cellist Kirk Starkey contributes a mellow richness to the central tracks, and has a fascinating surname.
[x] The elusive niche category of music that this record occupies might be designated as astro-roots, chamber-surf or rural chorale. Listen and decide for yourself.
Posted by Corby's Orbit at Saturday, October 13, 2018