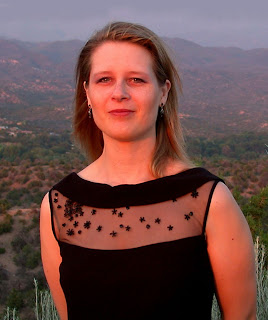 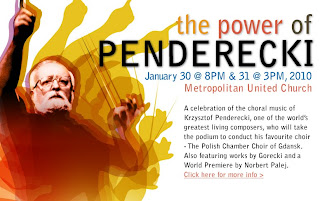 I caught the first installment of Krzyzstof Penderecki's chamber repertoire at Walter Hall Wednesday. I walked in at showtime and sat in the front row. Only in Toronto.
The Maestro was in attendance: he is Artist in Residence at the U of T music faculty this week. A major choral performance at Metropolitan United Church Saturday night and Sunday afternoon will climax his fertile tenure.
Both major cello solos were featured: the second, more gregarious composition written for Slava Rostropovitch opened the show; played by Winona Zelenka with a knowing and trusting smile, her sincerity and sensitivity obeying the amoebic flow of the composition as she seduced Penderecki's muse openly and lovingly. The 1953 Sonata for Violin and Piano that followed was a tight negotiation between the predatory motions of piano and the tidal gradients of the violin, which evaded the columnar obstructions of harmony with billowing sails of semitonal bouyancy.
The revolutionary 1968 cello solo that followed ( Capriccio per Sigfried Palm )brought all of the composer's anti-totalitarian forces into play: pre-Walesa dockyard uproar, the narrative fragmented into mathematical intervals, bestial queries, boatwhistles and seagulls, and a sudden sweet Spanish C arpeggio motif of intimate clarity, followed by bowing on both sides of the bridge, the cello verite approach bringing out the furniture voices of the instrument, requiring the full breadth of the hand, making contortionist demands upon David Hetherington's temperament, fulfilled with both abruptness and candor, bouncing and scraping, and ending with a long true foghorn tone bowed ON THE TAILPIECE.
Building in complexity and ensemble size, a Quartet for Clarinet and String Trio followed with long rich tones flowing from both reeds and strings, the clarinet inviting the strings into a conversation with a minor third query resulting in airy diminished flights of commentary, ghost-whispering from a violin and melancholy ruminations on the part of the cello. Breathy nostalgia and perhaps hopefulness are the responses of the clarinet, followed by excited pizzicatos, a rise into a waltzing celebration without traditional resolutions, like a nightmare polka that leads into a release from the turmoil of opinion into a communal certainty. Really good music.
Finally, a triumphant performance of the Sextet for Clarinet, Horn, Violin, Viola, Cello and Piano ( which Penderecki himself has "rarely heard performed so well"), exemplified the composer's poetic claritas at its best. The strings and sequestered horn negotiate, in increments of minor seconds, a very delicate proposition, forming allegiances and then overriding rhythmic constraint and restraints with gestures of humourous or obstreperous abandon until a descending theme crystallizes to dominate the second movement. The verve of the performers galvanized the audience into a tumult of applause, and the Maestro came to the stage for joyful embraces and cheek kissing. The flowers of his imagination had filled and decorated our faces and hearts like they were antique vases stuffed with fresh bouquets.
The smell of oranges, tingling, sweet and complex with the vigour of acidity.
The waxing frigid moon in the steamy exultation of a clear obsidian sky.
Posted by Corby's Orbit at Friday, January 29, 2010

Email ThisBlogThis!Share to TwitterShare to FacebookShare to Pinterest
Labels: penderecki