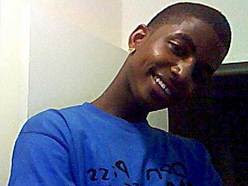 Deep brown shadows arched beyond the golden streetlamps in a Regent Park co-op on that somber October Friday night as much of Toronto's critically obscure community of reggae musicians rose and gathered to support star drummer Raffa Dean and his family. The tragic loss of Raffa and Karen's son, Sealand White to a pointless discharge of gunfire into an opening elevator door last week has shattered their lives, and the lives of his school community. A tearful crowd of teens wept and hugged beside a tribute wall full of the fifteen-year-old's exploits, while the night's breezes flickered candles over a floor space covered in bags of Skittles. The purple ones were his favourite. Reggae and hiphop sounds gently soothed and smoothed the sobbing and the silence of the crowd of about a thousand mourners. The intensely inventive and fun-loving qualities of the popular lad were the epitome of all that Jamaican culture has to offer; these were characteristics largely inherited from his father, Raffa Dean. As a drummer, singer and a beacon of steady personal Rasta cultural force, Raffa has had no equal in this city. Growing up amongst tightly focussed musical peers of Jamaican background in Malton Ontario, Raffa would run home after school every day to practise the drums. He was called to Montreal at the age of seventeen to play for reggae royalty, Dennis Brown. As jazz musicians revere the abilities of Tony Williams, who famously joined Miles Davis' band at the same age, Raffa's progress was as precocious and as in fluential. Since Leroy Sibbles left Toronto in 1993, along with the passing of Jackie Mittoo, reggae, arguably the most important style of music to evolve at the end of the last century, has languished in Toronto. A once-thriving cultural scene, centered at the Bamboo and the Jerk Pit has been excised from the media and club interest that sustained dozens of local bands in the 80's and 90's.
I was at Jahmeel 'Shanx' Spence's funeral in September ( bullet-ridden at Lawrence Ave. and Brimley - another B.S. murder). He was carrying on the reggae cultural tradition in new ways. The pastor asked "where is the family", and a hundred people stood up.
Now Sealand White. These were good children that many knew to be full of the good things in life, not random gameboyz. More deaths are happening week after week.
Try to be a human and walk the earth in peace. Deep winds will blow you down in a moment too,( in Jamaican patois' idiom, the code of acceptance says do not feel no way). Let's work on the gun culture together; from cops n robbers movies, music and media and conversational bravado, retreat from levity and irony. Death is too real, but sudden and random death is soul-killing, fuelled by hatred and ignorance; it is just the end of the beginning of a pain and sorrow that will last through generations.
“He was just in the wrong place at the wrong time,” a devastated Jax White said of her younger sibling.