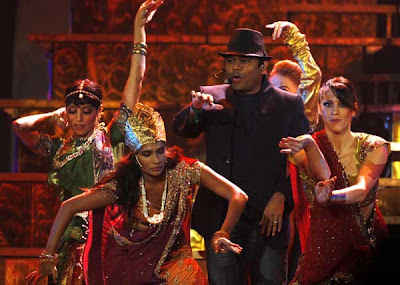 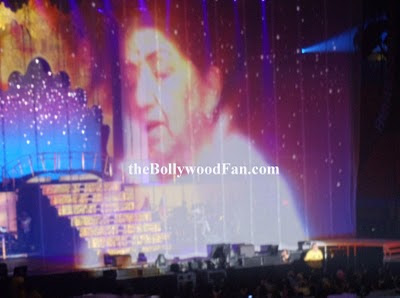 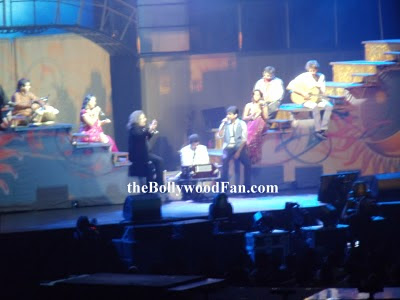 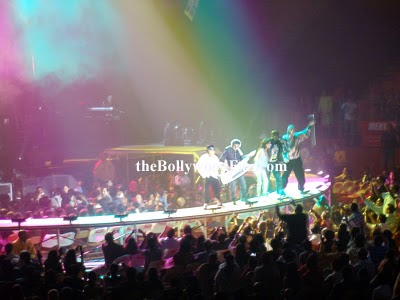 I was at the-almost-best-show that I've ever seen on Sunday. It is a close and unwinnable contest for first place, with perhaps a thousand to compare amongst. But not many like this, my friend. It was the vision of genuine Indian genius A.R. Rahman, performing a make-up show for the Journey Home tour that had stopped just before it reached Toronto last June, due to a collapsing lighting rig in Detroit the night before. I can't remember ever having felt the shivers of pain and pride emanating so intensely from any other performance piece (maybe Isaac Hayes at the O'Keefe, maybe Bob Marley at Massey Hall in '76. And Mary J.).
There were banks of empty seats. On the floor, where ticket prices ranged from $350-$500, about 3/4 of the seats were occupied. No matter, the view from the surrounding arena had the panorama and scope that Rahman's vision was crafted for. As grand as imposing as the sub-continent itself, the columned curtained stage was presented at the beginning as a temple. A ghetto youth ran in panic, spotlighted, from the back of the auditorium to the stage, where the projected image of a door opened to him and scooped him, and us, inside to play and dance to a world-wide variety of musical styles; indeed we had taken refuge together in the temple of music.
Twin staircases that would later become walls and prisons and stages ushered him up into the welcoming intoxication of O... Saya, the opening number, with the composer singing and strolling down the staircase in a fedora and suit, stylishly conjuring memories of both Sinatra and Michael Jackson, as dancers radiated out around the floorspace and a dozen virtuoso musicians stressed the groove to the depths and heights of their expressive powers; high-def live rear projections, expertly filmed and edited, focussed the audience's attention as lights and sliding patterns spun around the performers. (I didn't see a cameraman all night). Judging from internet evidence, the show has changed and evolved since the accident in Detroit. The singing progressed forward to a curved projecting catwalk that embraced a hundred of the lucky fans in the first ten rows with three singers led out on parade by a scepter-wielding DJ BlaaZe and caboosed by Rahman in casual whites with matching ball cap and a portable keyboard/lyre. This was the first of a dozen quick costume changes that Rahman managed during the show. Sexy hot-pants and suggestive dance moves were enticing, but they always stayed a few shades short of lurid, maintaining an admirable classiness that mixed well with the sensuous spiritualism of the music.
Rahman's prominence as a worldwide touchstone for the hopes of oppressed Tamils caused the majority of expats in the audience to respond boisterously to the Hindi and especially the Tamil songs of DJ Blaaze, Lata Mangeshkar, who appeared as a hologram on the front curtain to engage in a moving duet on Luka Chupi from Rang De Basanti , Desi superstar Hariharan, whose rapid fire microtonal pleas and endearments sent all into a state of rapture, the crystalline Richa Sharma, and Sufi / Ganesha / Bhangra echoes that permeated, but never dominated the truly global allegiances of Rahman's vision. Dance-pop, jazz piano, acoustic guitar duets, chanting, virtuoso solos on the violin, cylindrical drum, wood flute, sitar, and trap kit, as well as contortionists, acrobats, break dancers, ballet, reggae, MJ's Black or White, a Happy Birthday singalong for the composer's 62-year-old mother and a program of Indian music at the center of the show: each had their moment, and were swept away by a change of light, beat and costume, so that by the climactic Jai Ho finale, a seeming dream-time had taken up our collective consciouness for almost three hours, like an epic film. The boy of the opening returned and ascended the staircase with the man he had become, and the two turned hand in hand to wave farewell as credits rolled on the curtain, ending with urgent quotes from Gandhi and his disciple, Martin Luther King Jr., imploring us to further the dream for peace, especially in the arena of racism, which continues to frame the major conflicts that defile our world.Messages of hope and world-wide unity in the sweetest context imaginable.

In the wake of the slaying of musical don-in-the-making Jahmeel "Shanx" Spence of the East-end La Phamillia crew, a special dedication to the goodness and mercy which must surely bring peace to the beleaguered friends and family and to a neighbourhood where a good life can be stolen away as casually as this.
Hometown hero Glen Ricketts was on the show describing the vast terrain of his reggae/soul/rock career, and his up-coming movie premiere at Revival this Thursday, a thriller entitled"Eyes Beyond"by Torontonian Elizabeth Rizzuto. Virtuosa singer Rosita Stone also gave up two live blasts of Spanish melody and passion, as her cd release at the same screening approaches. The show will benefit Mental Health programs in Toronto.
An interview with Dylan-approved singer/songwriter Mary Gauthier gave a warm heartbeat to the dramatic retelling of her wanderings in search of her true parentage detailed on her latest release "The Foundling".
Final trajectory was calibrated by Greg Lawson urging us to "Watch This Sound": sampling the best of those Jamaican artists who have called toronto home: Jackie Mittoo, JoJo Bennett, Leroy Sibbles and so many more that perhaps a Part Two will be necessary.
Foals forgot to call. Still worthy Mercury noms available live at Lee's Palace Monday.
Posted by Corby's Orbit at Friday, September 24, 2010 No comments:

My Roots - Guitar playing in 1979 for Ernie Smith

Posted by Corby's Orbit at Wednesday, September 08, 2010 No comments:

Email ThisBlogThis!Share to TwitterShare to FacebookShare to Pinterest
Labels: Ernie Smith and the Roots Revival 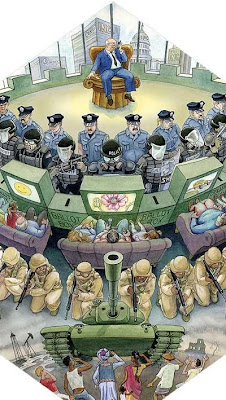 Geoff Berner's HIGH GROUND from KLEZMER MONGRELS
Wealthy people like to live, live near the water
They pass their real estate down to their sons and their daughters.
Generations are happy just enjoying the view, but
When the water starts rising you know what they're gonna do

All those singers and actors and philanthropists
Say the poor are at the top of the priority list.
But when the levees start breaking and the barriers fall
Where will they be when we come to pay a courtesy call?
With their mistresses, wives, pets, children and all
At the top of a hill behind a fortified wall.

Every sad number that the scientists find
You get the feeling that some people really don't mind
To see a new feudal age for the whole human race
'Cos the rabble will finally be all back in their place.
They'll be no revolution, we'll be meek as wet mouses
Begging them to let our children serve in their houses.

The rich are gonna move to the high ground
The rich are gonna move to the high ground
Holy doodle, look at your town
The rich are gonna move to the high ground
Take me higher to that higher ground
You and me baby, we're gonna watch the poor drown
The show went a little more electrotextural than normal, but what is ever normal in Orbital Music? Mod Pop trance-formations observed through the Corbiscope this week included the new Hawksley Workman Milk, new Stars' Ghosts, Winter Gloves' All Red, Rae Spoon, Neon Indian, and some re-grooved Beatles and loungey headspace loops. Then we let the blood rush back to your soul with Greg Brown, coming to Hugh's Room next weekend, Geoff Berner's eloquent High Ground (SEE ABOVE), and Mary Gauthier's and Stacy Burke's different songs about home and family. We let a touch of blue shift come over next with a new Charlie Musselwhite ("Sad and Beautiful World"), Les Copeland ("Don't Let The Devil In"), both on Alligator Records, and some rare retro Sly and the Family Stone and Curtis Mayfield, capped by Fred Hammond's jahovial "Happy". Then a Brazilian orgiastic drum chant from Black Orpheus took us to warp speed, Frail Fragment and Skindred brought the Metal Health and the landing pad came into sight with Tanya Philipovitch and her Secret Fiction Romance music.
Posted by Corby's Orbit at Monday, September 06, 2010 No comments: