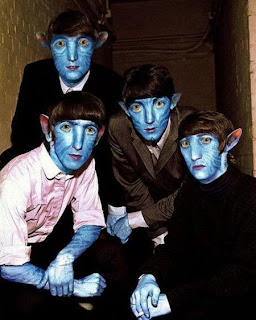 Brian Blain dropped by with his about-to-drop cd, New Folk Blues, which he made at the end of 2010 with big bass boss George Koller. He previewed a couple of lean soulful tracks from the disk, including a tribute to Lenny Breau, and played one live selection on his road-scarred Epiphone. He also echoed Paul James' assertions that the blues revival began with the Beatles on tv, and that one must constantly and by all means hold on tightly to one's Stratocasters.
Then the blues birds of happiness flocked into the Orbital flightpath with Treasa Levasseur, Monkey Junk's harp wielder Steve Marriner and Sirius DJ Bill Wax, king of American blues broadcasters.
Respect for the Reverend Dr. Martin Luther King Jr.'s upcoming birthday celebration gave the whole show a warm gospel undertow, and the landing pad will be the Toronto Blues Summit weekend, now in full swing.
Posted by Corby's Orbit at Saturday, January 15, 2011