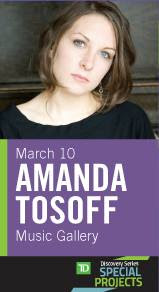 Two CD's of major heft will be appearing at release shows this week:

Amanda Tosoff has cultivated her first album of vocals, Daffodils, after a significant career of trio and small group work, as well as providing a pivotal piano patina for the recent Emilie-Claire Barlow Orchestra tour. The title song of the album is also nominated for the International Songwriting Competition. She will be rising to the Orbital occasion at 6:00 today for a chat and a listening party in advance of her CD release next Thursday at the Music Gallery, with
Felicity Williams – VoiceHolly Clark - VoiceAlex Goodman – GuitarAmanda Tosoff – PianoJon Maharaj – BassMorgan Childs – DrumsDrew Jureka – ViolinAndrew Downing – Cello.

And friend of the Orbit Isabel Fryszberg has compiled a collection of original songs, Coming Out Of Darkness, from Creative Works Studio, a music initiative of St. Michael's Hospital, which will be released with a performance at the Tranzac this Tuesday, March 8th. She will be live with some of The Social Mystics for a preview at 6:30. Be so there!
Posted by Corby's Orbit at Friday, March 04, 2016