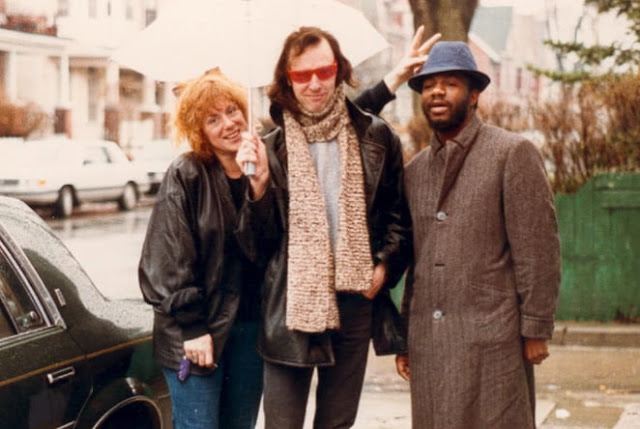 Ellen, Kit & Quammie on a rainy day outside Clinton's.
Photo by Michelle Josef.

The potency of an artist’s gift can be assessed by the radiance that it transmits through time and space and by the character of the residue that endures on record. In the wake of her sudden departure, from cancer, this past June, Ellen McIlwaine’s music continues to pulse with a unique primacy. In performance, she was robust, playful and meditative. The insights carried by her lyrics would cascade into the heart of the audience on a current of wildly virtuosic guitar playing.

Her talent was of such a magnitude that the disconnect between her artistic status and her essential life circumstances seems remarkable. Her last twenty years were spent as a Canadian citizen in Calgary, driving a school bus. She adored the job, and the children, and it mitigated any existential stress by providing her with latitude, income and inspiration enough to maintain a semi-retired lifestyle, while allowing her to take on local gigs and recording opportunities. 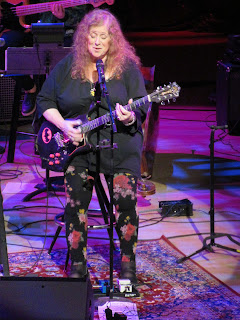 Her antipathy towards flying left her professionally isolated, but she rallied the will to attend and perform at the Toronto Blues Society’s Women In Blues Revue at the end of 2019, after having been awarded their prestigious Blues With A Feeling Award earlier that year. 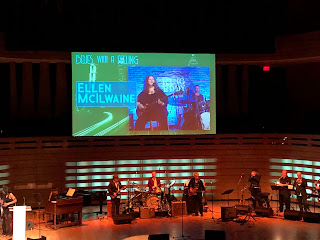 In 1993, while holding down a residency at Clinton’s Tavern in Toronto, Ellen made an album for Stony Plain, Looking For Trouble with drummer Michelle Josef (David Wilcox, Prairie Oyster), bassist Kit Johnson (Murray McLauchlan, The McGarrigle Sisters) and percussionist Rudi “Quammie” Williams (Truths & Rights, Martha & The Muffins). The record is full of great tunes, and explorations into reggae and electronics (Holger- Good time for a re-issue?-ed.). Their memories of time spent with Ellen emerged on social media soon after her abrupt passing and have since broadened beyond eulogy to encapsulate the spirit that she so readily shared with her Canadian collaborators.

“This post is about Ellen McIlwaine, and what I think you might like to know about her last days. I was reluctant to share this, but I may have been one of the last of our wide musical community (perhaps even the last) to speak with her.

The second last time I spoke with Ellen was in late May sometime and she was on top of the world. She had found romance and a documentary of her extraordinary life was well under way.

About 10 days ago my phone rang. There was no name on my display but I recognized the number as someone I knew so I answered. I did not recognize the weak voice on the other end of the line as being Ellen until she identified herself. She told me she was in hospital and then gave me the (unfortunately accurate) prognosis. She also told me that the diagnosis had been very recent, a couple of weeks was all the time she had had to live with the knowledge.

But then we talked about friends, music, shared experiences and as we talked she began to laugh, we both did, and her voice soon became the rich sound we all know. After about 20 minutes, we said goodbye happily, cheerily, and with the sense that we would soon be talking and laughing again.

And here's what I feel I had to share. Ellen was not afraid, she was not angry, she accepted things as they were and spoke lovingly and happily about her life, her friends, her career, her fellow musical collaborators, all that and more. She also talked about her delight in the morning birds outside her window, for which the staff had provided an identification chart.

Her happy, strong farewell that day is what stays with me and gives me some solace, perhaps it will do that for you too.”

Since then, he has also reflected, “I never had any sense of her spiritual leanings. She referenced Christianity in songs sometimes but not in her own. In gospel songs such as “I Bid You Goodnight”, with which she closed pretty much every night she sang "I love you but Jesus loves you the best". But I didn't get the sense it was a 'message' just some lyrics that meant a lot to her personally. Of course AA has a spiritual element but again I didn't have the sense that it was the 'important thing' about it. Speaking of which I think she would be happy to have someone talk about AA and the pride she took in her temperance. Her car was certainly emblazoned with AA slogans back in the 80’s. As long as I knew her, she was the polite, mild person you spoke with right up until the moment she stepped onstage, and then all that happened.”

Quammie Williams also felt the need to commemorate her on Facebook:

“We were playing in Edmonton in the late 80’s and went to Shogun, a Japanese restaurant north of Jasper around 112 St, one of the only places to get sushi in Edmonton at that time. We sat at the sushi bar and an appropriately stern-looking sushi chef took my order and Michelle's. Then he got to Ellen and she spoke in her fluent Japanese, ordering what she wanted. He wrote it down then walked a couple of paces and did one of the most amazing double takes I've ever seen, her accent had been so good he didn't even notice that it came from such an unlikely source. They had a long chat and some laughs as she explained where and how she had grown up in Japan.”

In retrospect, Quammie recalls, “She was a very spiritual person. We would talk about her journey backstage often. And it came from within, not so much from organized doctrine. She once introduced me to Bonnie Raitt and I listened to the two of them talk about all the personal power that they had had to acquire in order to get control of their careers and their music and they spoke on a very high and soulful level. It was wonderful and kind of dizzying to hear them communicating so articulately about matters of faith.” 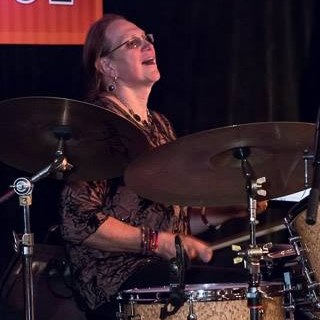 In Toronto recently, Michelle Josef was able to recollect: “After my gender change, Ellen just kept hiring me, at a time when I was being treated like I was radioactive by the music business. She knew what it was like to be different, because she was. Growing up in Japan, she was a foot taller and thirty pounds heavier than any of her peers: big and pink with long red hair in a world of short girls with pageboy haircuts.

Some people experience trauma and it makes them bitter and hard. With Ellen it made her an understanding and compassionate person. Accommodating, and kind. And she wasn’t treated that way always.

She got man-splained to a lot. She had this Marshall amp that she’d snapped the LL’s off so it was a female amp, “Marsha”, and she had put some lace over the grille. So soundmen would make an assumption, having no idea of her command of what she did. And they’d tell her how to set up her amp.

It’s no secret that she was recovering from alcohol addiction, which doesn’t mean you are cured. It means that you no longer cope with the underlying traumas of your life with alcohol. She certainly struggled with song-writing after she got sober. Her muse was no longer lubricated. The songs would take a longer time to come to her. She spent a lot of time on the road working on tunes. And she had a hurting heart. Anyone who comes to the blues full-on, as she did, has to have a hurting heart. There definitely was an intense essence of spirituality to her, the feeling of a higher power in her playing and singing. She held a groove like a synchro-mesh on a fucking Ferrari. And it would take the audience’s breath away.

I just can’t compare her to anybody.

She expressed a confluence of very diverse life and musical experiences. She scat-sang in Japanese phonetics; she had a huge gospel background that completely informed her singing. When she sang it was church. Loved Son House. She told me she had quite a following in the gay and trans community; drag queens loved her and she loved them back. She just loved anyone who loved music.”

Ellen Mclwaine would have turned 76 on October first. Anyone who encountered her, aside from a few sound technicians, found themselves permanently charged with her grace and positive energy and, as she sang, There Ain’t No Two Ways To It Now.