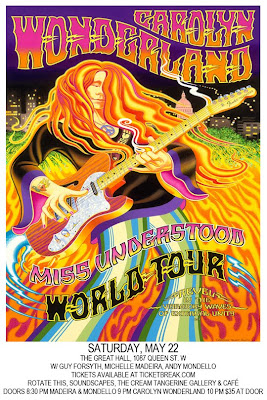 I saw two very different shows this weekend: on Friday the second night of Xavier Rudd at the packed Queen Elizabeth Theatre, and on Saturday, Carolyn Wonderland playing to 100 faithful at The Great Hall. Xavier Rudd is an Australian vegetarian with a triple stemmed didgeridoo, a Weissenborn, a Gibson ES 335, and two Zulu sidemen whom he barely acknowledges. He spoke little but platitudes to his college audience, played songs with strong heartbeats and "wo-wo" call-and-response sections that made me wish for Sting. His songs repeat the same philosophy of love the earth, free the people and let's see what happens. The first song arrived at peak energy in a cloud of weed and then slackened off through the rest of the night as the formula worked its way through...djembe solo, audience on stage for one song ( security close at hand), helicopter dance, singalongs, and, when in doubt, wo-wo it out.
Carolyn is an extremely talented Texan guitarist and singer (and trumpeter!), evoking all the fierceness and tenderness of an Ellen McIllwaine reborn. Her band included Kansas City prodigy Guy Forsyth, Cole El-Saleh on keyboards, and a knife sharp rhythm squadron. The band's zone of humour and creativity grew organically to support Carolyn's spontaneous, inventive musical powers and warmth. She gave time generously to showcase Guy's songs and his talents on guitar, harmonica, uke, saw, and repartee. The gorgeous ripple-finished Telecaster that she stood and sat with all night put out more smoke and firecrackers than Iceland's Eyjafjallajökull over the course of a set that included blues, rock, gospel, and cumbia, and soulful replays of songs by Janis Joplin, Johnny Winter, Bob Dylan and Terri Hendrix. It was a great opportunity for Toronto to get to know a vivid new interpreter of modern song. The small audience of old and young responded with loud affection. "Make Toronto weird!" was one shouted request. Don't miss her next time. She just might manage that.
Posted by Corby's Orbit at Saturday, May 22, 2010