How I spent the weekend 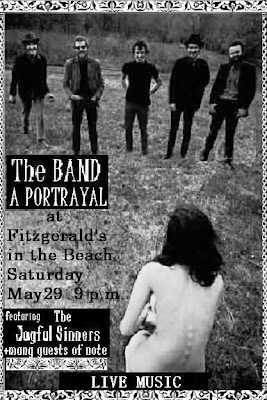 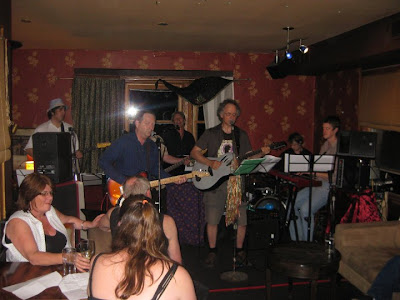 As the sun set last Saturday night in a breezy gondola above the Beaches, in a decorated turret atop Fitzgerald's, eleven musicians with a handful of the faithful in attendance cranked up a noisy harmonica to begin A Portrayal of The Band, Canada's most strategically placed eclectic cultural beacon, who refracted country, blues, soul and gospel music shining in the pure light of 60's and 70's revivalism through the hand polished lens of two major albums: Music from Big Pink and The Band. This was the beginning of a new form of music called Americana.
The harmonica in question brought forth Don't Wait, a song from their final album, Jubilation (1998), recorded after the death of Richard Manuel of Stratford, Ontario, and before the passing of Rick Danko of Simcoe, Ontario. Masterpieces and retooled classics followed, drawing out the wattage and funkage of the crowd and the musicians, as well as a few moments of crystal serenity. Mark Burkiett brought Wheel's on Fire to life in an unbridled ska arrangement. John Stainton created a howl of anguish on The Heptones' arrangement of I Shall Be Released and Stage Fright. Arch bassist Dan Mock worked the emotionally raw Don't Do It into a lather of confession, and Brad Sales provided a sincere reading of Robbie Robertson's lullaby to his daughter, All La Glory, as his own daughter Alicia looked on. Paul Corby played exultant ringleader to Life Is A Carnival and the seldom heard Yazoo Street Scandal, both of which gave Joyful Sinners' soloists Alan Zemaitis on bonfire keyboards, Adam Beer-Colacino on lava lead guitar, and Leland Whitty on the brimstone saxophone free rides through the tunnel of images and rhythms that The Band's music excels in evoking. Keyboardist Gary Baumgartner stepped up to the centre ring in the last set for a romping blast at Ophelia, followed by drummer Kyle Sullivan on the early anthem Stones That I Throw. Maggie Stainton got involved with a group effort on Acadian Driftwood, and more ensemble singing closed the night with an overwhelming version of The Weight. Encores happen. And so, Dan let loose with Alan's clavinet, growling "When I Get Off Of This Mountain..." and we all felt our hearts throb to the bottom of our feet.
Posted by Corby's Orbit at Tuesday, June 01, 2010

Email ThisBlogThis!Share to TwitterShare to FacebookShare to Pinterest
Labels: The Band