Vaclav Havel, a hero for today
It was his love of rock and roll as much as his moral outrage at the Communist system that brought him to prominence.
He co-wrote the influential Charter 77 anti-Communist declaration in protest at the arrest of a Czechoslovak rock band, the Plastic People of the Universe.
A perennial contender for the Nobel Peace Prize, Havel never won, but remained active in anti-Communist causes from Cuba to China until his death.
Transcript: Havel talks to CNN in March about unrest in the Arab world
He urged Chinese authorities to release dissident Liu Xiaobo, whose Charter 08 call for greater political freedom in China was inspired by Czechoslovakia's Charter 77.

Havel was a lifelong Zappa fan, particularly the early work with the Mothers of Invention. It's not hard to think of Sixties Czech youth hearing "Trouble Every Day" and finding a kindred spirit therein. "Plastic People" from Absolutely Free was a key track; lyrics like "Watch the Nazis run your town/Then go home/And check yourself" must have struck a chord as a young person in a repressive government. (Never mind that its original inspiration seems to have been the fashion clones the Mothers encountered on the Sunset strip.) In 1990, Havel asked Zappa to be a consultant for his new government on trade, cultural matters and tourism. This was scuttled by the U.S. Administration, who probably had less than fond memories of Zappa's opposition to the PMRC. So he ended up serving as an unofficial cultural attache, and in fact played his last concert in Prague. 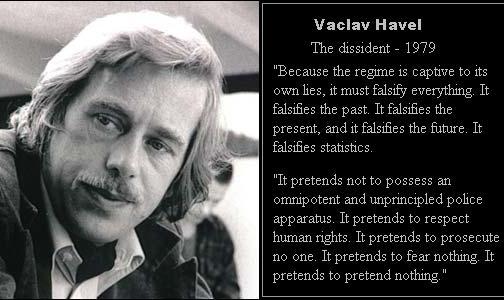 In his classic call for everyday citizens to recognize their power to change their world, Havel uses the example of a Soviet-era grocer placing a state-sponsored sign in his store window with the slogan: "Workers of the world, unite!"
"If the greengrocer had been instructed to display the slogan 'I am afraid and therefore unquestioningly obedient;' he would not be nearly as indifferent to its semantics, even though the statement would reflect the truth," Havel wrote.
So why does he do it? "The sign helps the greengrocer to conceal from himself the low foundations of his obedience, at the same time concealing the low foundations of power. It hides them behind the facade of something high. And that something is ideology," Havel wrote. "Ideology offers human beings the illusion of an identity, of dignity, and of morality while making it easier for them to part with them."


"I would be glad if it was felt that I have done something generally useful," he said. "I don't care much about personal fame or popularity. I would be satisfied with the feeling that I had a chance to help with something in general, something good. That history gave me that chance."
Posted by Corby's Orbit at Sunday, December 18, 2011