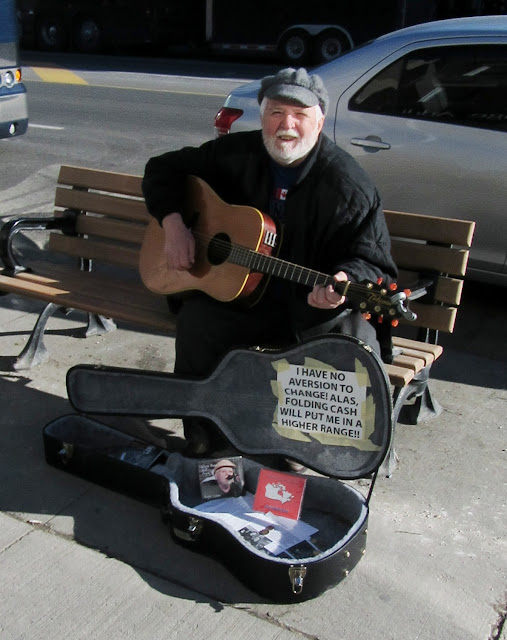 Living La Vida Winterfolk for three days on Toronto's Danforth sure does bring out the inner "folk" in you. Friends grow out of tightly packed corner strangers and random volunteers turn into spirit guides. The musicians wander into the daylight on Saturday and Sunday afternoons with their midnight glow intact. Little wide-eyed kids get their first dose of real music alongside their wide-eyed parents. This year's edition was especially congenial due to aggressively beautiful weather that gave everyone a squinty smile and a boot-free attitude. 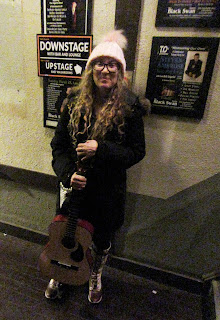 For the fifteenth time in as many years, musicians from east of the Don River hosted a six-venue kitchen party for 150 or so acts, invited from the GTA and the nearby peripherals. Lead conspirator Brian Gladstone got the inspiration for this event when he realized that if no folk festival would hire him, he would have to start one of his own. 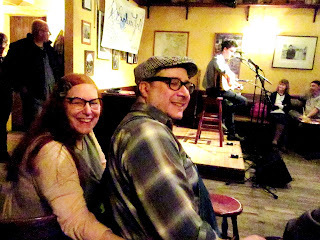 Beverly Kreller, booker and publicist for Winterfolk, and owner/operator of SPEAKMusic, has her finger on the pulse of emerging talent on the Canadian music scene. SPEAKMusic is only one way talent comes to her attention. She scouts music year round through sonicbids, submissions, and by attending a constant flow of concerts throughout the year. The talent is thoroughly laced with Juno and CFMA winners and noms, local legends, warhorses of the blues, and upwardly-motivated avatars of the new sounds and songs that will pave a path into the future of Canadian music. 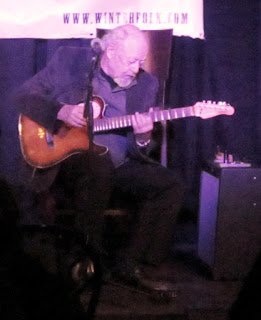 Friday night at the Black Swan opened with soul-baring reveries from the life of David Essig, who perhaps came the farthest to participate. Nanaimo-based but of American descent, David is a Mariposa, CBC and record production vet. He retraced his life in a tribute to friends, bars and family in a captivating set, played entirely on electric guitar. It was a huge contrast to his traditional acoustic blues ebullience, not only in tone, but in the pensiveness of his lyrical flow. Standing out brightly were a song about his Blue Valentine, Willie P. Bennett, a single crystalline instrumental, and a fine closer, "One More Song", recounting his father's last days. He threw us into the deep end. Jon Brooks followed up with return fire on the topics of violence, revenge and the end of the planet. "I'm not here to cheer you up friends," he intoned mordantly. 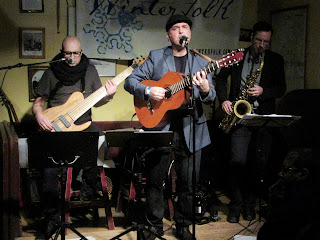 Across the way at Dora K., Louis Simao was restoring calm in zephyrs of Mediterranean sway with repertoire from his recent, brilliant A Luz CD.  And at Terri-O's, folk songster David McLachlan and his band were debuting the songs of Traveling Truthfully, composed and recorded last year in Nashville.

Saturday brought sunglasses weather and a slate of workshops based on harmony, spirit and Canadiana. And more Nashville.

And downstairs, the Saturday regulars were in full boisterous wakefulness, as local folkers Glen Hornblast Kirsten Jones and Clela Errington sang angelic Americana anthems in the back room, featuring guitar-chameleon champ Bob Cohen. The Nashville vibe continued at a showcase at Dora's and another hour at The Swan with a swing shift consisting of Kevin Bell, Kim Doolittle & Kat Goldman. 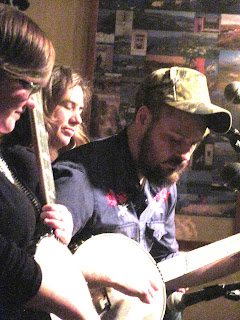 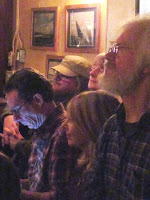 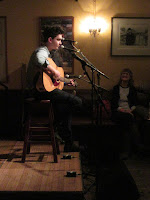 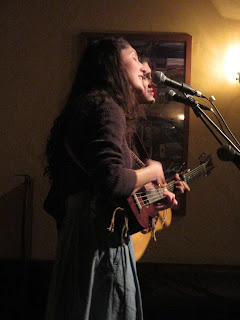 A collective fresh breath was taken as Tragedy Ann took the stage and emanated romance, harmony and joy with such charm and dynamic interplay that the hush became palpable. The applause rose in wave upon wave throughout their set.They repeated the accomplishment a few moments later to open the SPEAK MUSIC showcase. Isaak Bonk brought Gerdie's Folk City back to life with topical talking blues and a lyrical homage to the song-poetry of the sixties. 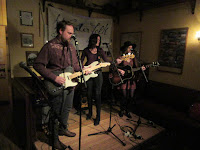 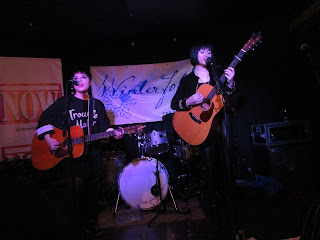 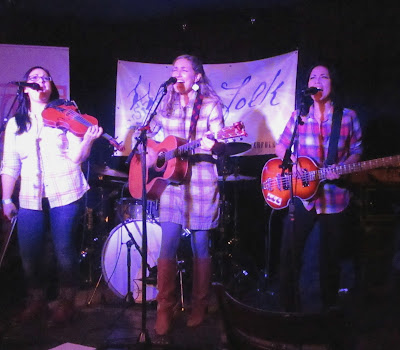 Much of the crowd shifted at sunset to the main event, The Harmony Hoedown upstairs at The Black Swan, featuring The Redhill Valleys, who had just finished lighting up Dora`s, the pop-folk sibling conviviality of The Command Sisters, and streamlined Laurel Canyon-style thumpers Johnson Crook.


Emerging from studio seclusion with all the promise of a sun-splattered Wiarton Willie, Trent Severn made everybody`s day with a triumphant set of maple and trilliums and a preview song from their forthcoming album, Portage, a show-stomper called Eh Canada. 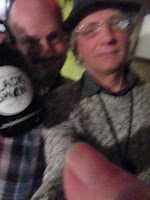 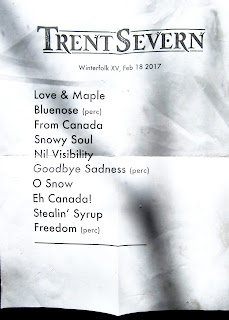 Singer Dayna Manning also brought me in a black 64-ouncer of Trent Severn beer from Stratford brewery Black Swan (courtesy of her Dad; gracias papa). Avoiding a legal skirmish with my new B.F.F. Carmine, I had to surrender it to management in order to keep the liquor license safe and also to keep from being removed from the premises. The paparazzi had a field day.

Sunday was blues church. Our eminent host, deacon Jack De Keyser, having just committed full scale slaughter on the same stage a few hours previously with his all star band, returned to survey the battlefield, and to welcome a wine list of fine vintage Toronto guitarists to come up and cauterize their blues wounds. 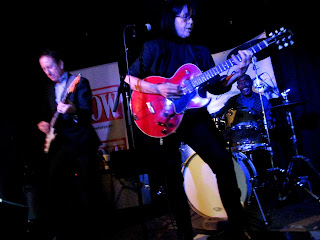 Mike McKenna and Tony Quarrington preceded my arrival, but when I got there, I found the hall packed with highly amusable enthusiasts.  Margaret Stowe was decimating the room with an unprecedented assault upon the modes and measures of the blues that had more to do with Sonnys Greenwich or Sharrock than any of the Kings of the genre. Jack and his rhythm section (Alan Duffy & epic snare slugger Rick Donaldson) held stoicly to the changes as Margaret displayed terrifying leaps of faith over suspensions, extensions and altered dimensions of music. Trust me folks, this is not mere hyperbole. 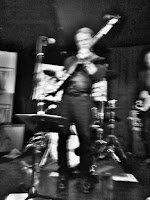 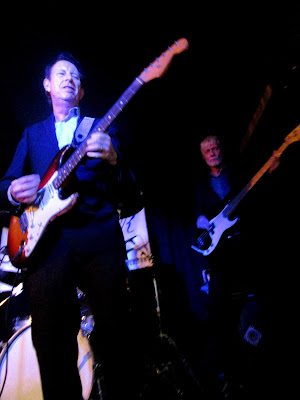 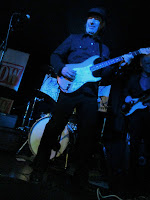 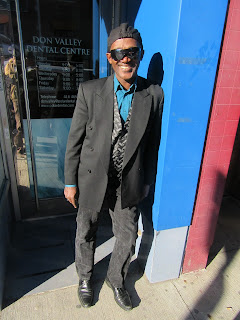 We all needed a bit of down time afterwards, so D`Àrcy Wickham brought a nice blues twist to David Crosby`s Long Time Coming, followed by ``Danny on the Danny``, a blues carousal with Mr.Gold Digits, Danny Marks, a crowd favourite. He and the De Keyser band set off smiles and sparks with classic Hendrix & Chuck and a cheerful blues camaraderie. 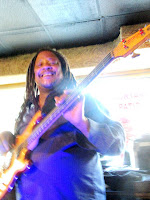 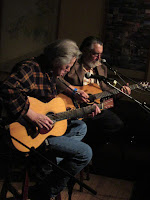 Over on the shady side of the avenue, Tony Quarrington and Wendell Ferguson (``Don`t look for his sensitive side: he`s sitting on it.``) were having an amiable go at acoustical knitting with a lot of insights into their inspirations and processes in between tunes. Tony was having an exceptional day since the live tribute CD The Songs of Tony Quarrington was to be launched later in the day and his old muchacho Joe Hall was playing in the festival too. Random link-ups abounded in the clubs and on the street where fruit markets, a record shop and an L.C.B.O. encouraged all kinds of chance encounters 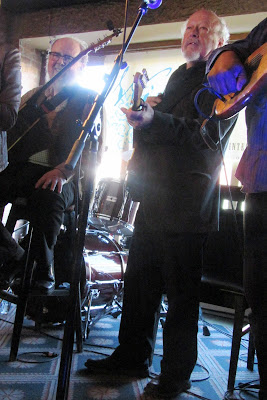 .
The juxtapositionof  hearing Brian Blain, David Essig, Jerome Tucker and Danny Marks on one stage exemplifies the kind of cross pollination that takes place on this fantasy-folk weekend

Every year Winterfolk manages to scrape a little winter off of all of us lucky enough to attend. This year was particulary thorough. I will not include a picture of the guy who was in his bathing suit. Thank me by private message.

...and what was that last piece that Annie Bonsignore played???? 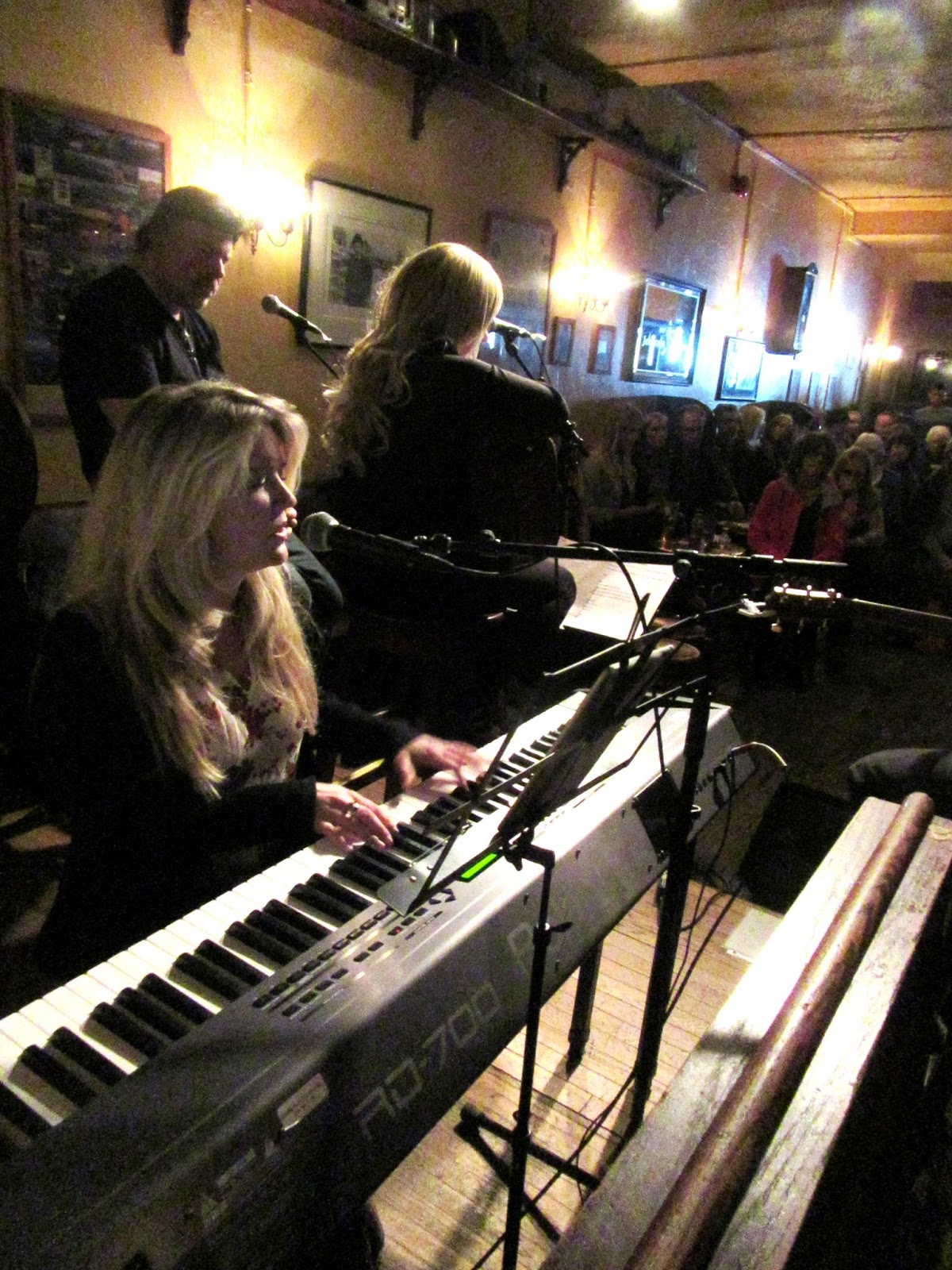