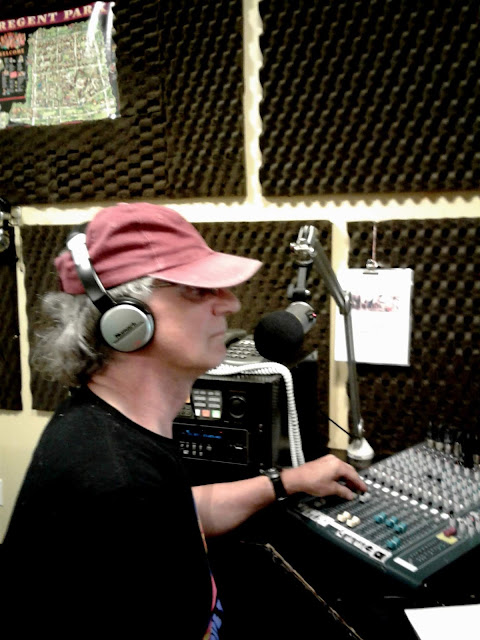 Stuck at home with nothing to do?  Feeling like you need some company but scared to actually invite somebody over?  Disappointed because even some of your local community radio station have sent their programmers home and started running repeats?  Thank goodness for podcasts! The shows below are some of the most iconic and long-running in their respective genres.  It isn’t an exhaustive list, but if you’re looking for a friendly voice to keep you company and play you some music, they’re a great place to start. Click on the show titles below to go to their pages.

If you read Roots Music Canada, you already know Paul Corby because he writes here on a regular basis. But did you know that he also hosts a radio show on Radio Regent in Toronto? Corby interviews a range of acts, including lots of folk, world and reggae artists – he plays in a reggae band himself, as a matter of fact – and he plays a lot of great stuff.

Beer for Breakfast isn’t strictly a roots music show.  If it was, Broose Tulloch might’ve given it a different name. But Broose is a die hard supporter of roots and world music and a contributor to Roots Music Canada. He’s a fantastic writer who has told us some great stories from the Winnipeg Folk Fest and beyond. He’s also an engaging host and interviewer.

It’s hard to know what Vancouver folkies would do without Steve Edge. He runs their folk club, the Rogue Folk Club, and he hosts this flagship folk and world music show on CiTR.  And I have to say that listening to him read the UK soccer scores in that English accent of his truly is a soothing thing (although I guess no soccer right now). Steve is still producing new shows each Saturday morning and sending them in from home, but he also has an extensive back catalogue to work through.

Worldbeats Radio and Celt in a Twist

Cal Koat is something of a world music celebrity in Vancouver, and he deserves credit for having managed to get world music programs onto commercial radio several times over, sometimes for years at a time – and he also hosted a pretty great world music TV show for a while on OMNI. But regardless of whether or not you can find him on the radio, you can always count on his two podcasts for great new world and Celtic music.

John is a truly seminal figure in the Canadian blues scene. He was a co-founder of the Toronto Blues Society, and he regularly reviews records for MapleBlues, the TBS newsletter. And then he hosts THIS show each week on CIUT.

Broadcast live on CKCU FM in Ottawa every Saturday morning from 10 until noon, Canadian Spaces was founded by the late local legend Chopper McKinnon and has been carried on in his absence by a team of volunteers coordinated by artist and general folk music community-builder Chris White. One of those volunteers is veteran folk music journalist Mike Regenstreif. The live version of Canadian Spaces is off the air during the pandemic but Chris has been experimenting with streaming a version of the show from his living room on Facebook Live on the Canadian Spaces Facebook page.

Thursday mornings at 9 a.m. ET, Montreal folk fans start their day with the voice of Gerry Goodfriend – who continues a long tradition of Thursday morning folk on CKUT. Gerry took over from Mike Regenstreif’s Folk Roots Folk Branches when Mike moved to Ottawa

Radio Wrycraft and From Cover to Cover

Celebrity album designer Michael Wrycraft hosts these two programs on Folk Roots Radio online. One of them features music from albums he’s designed the covers for. The other one is … whatever he wants it to be.
If you are enjoying this content, please take a second to support Roots Music Canada on Patreon!