The Grain of It: The Wheat Pool Call It Quits After 7 Years

Why do we love a band?
As soon as that question is asked, one’s heart rushes for that private image, the cover of your inner jewel-case.
You know who you love. Their flag is always there, waving, even when the air is calm and still elsewhere.
The circumstance of your first encounter with their music is radiant; the intoxication of sharing their masterpiece record, song by song, with an intimate friend is a forever moment of bliss; the evolution of their music into the theme music for an episode of your life is epic and lit with imagery.
I used Hauntario by The Wheat Pool to travel through the foggy Poconos to Manhattan, to survive a traumatic life crisis, and to build a small barn in my yard in 2009. It is a unified field of interconnected stories. Futility, loss, the big lonely of prairie melancholy, and a formula for escape all twine like sweetgrass through the eleven songs. Loser characters attempt to speak their selfish truths. It begins with an ending and ends with a beginning. It fixed me.
Now they are breaking up; the press release came early this year: “We would rather burn bright and burn out. We have admitted that we aren’t four guys in the same place anymore, and that makes it really hard to be a great band.”

Live at the Dakota in June 2010. Photo by Paul Corby
After seven years (a traditional biblical perimeter), the lads will be playing a final show in Edmonton on the same date as their first performance.
It’s a hard call: front men Mike and Robb Angus are brothers. Two assaults on Toronto at CMW and NXNE had proved encouraging. The second of these campaigns took place without sublime drummer Stephane Dagenais. The band’s combustion level was on eleven, fuelled by feverish percussion, strippers, hockey games, and the acclaim of Toronto music weenies. It resulted in a free online EP, featuring a magical version of Neil Young’s Helpless.
Then, a year of silence. Mike Angus showed up in this part of the continent last year, in a bright red car, touring an album of personal acoustic tunes called “Hymns”. It was the week that Jack Layton died, and the elegiac nature of his music was stirring, and fit the mood of the city elegantly.
“When I hear that a band’s breaking up, I just close the book and take a step away,” says a Successful Music Business Dude.
“The demise? Super sad. I’m sure it’s not the last we’ll hear of those boys as musicians though,” comments James Murdoch, producer of Hauntario. 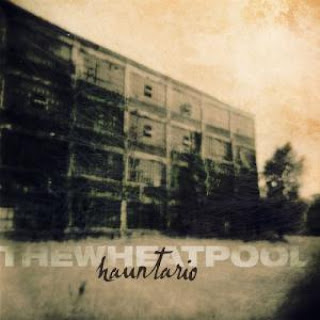 I sure hope that you will be able to find that disk and listen someday. Its intaglio of razor guitar work by Glen Erickson, splashes of pedal steel and piano, feedback, lyrical detail, and charismatic, wounded harmonies is like nothing else but Canada. It’s alive on my constant inner playlist, filed next to The Band, The Blue Shadows and Stratochief, drifting through the paintings of William Kurelek, and echoing ironically in the context of this week’s Canadian Music Fest, when hundreds of bands again come to Toronto; “kids too eager to see clearly…falling over at the beauty of the world” (from The Wheat Pool’s “Nervous Bird“).
If you’re in Edmonton, go see what I mean on the 23rd.
I will be out in the Toronto bars for CMW that night too, looking for some new band to love. And when I get home, I might go sit in the barn for awhile.http://thewheatpool.com/lyrics
Posted by Corby's Orbit at Thursday, March 22, 2012