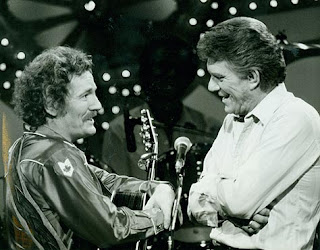 Canadian country singer Tommy Hunter played his last gig before an adoring hometown crowd on March 20, ending his career on his 75th birthday. The concert in London, Ont., came 66 years after his first appearance on a London stage – as a nine-year-old guitar player with dreams of being a singer.

Hunter was a familiar companion to a generation of Canadians, coming into their living rooms Friday night with The Tommy Hunter Show, a country music variety show that ran 27 years on CBC, ending in 1992. Hunter showcased big stars like Johnny Cash and Gordon Lightfoot, and gave a break to young talent like Shania Twain and Garth Brooks. Many Hunter fans shared their memories of the singer known as “Canada’s country gentleman” at Tuesday's concert.
Posted by Corby's Orbit at Wednesday, March 28, 2012