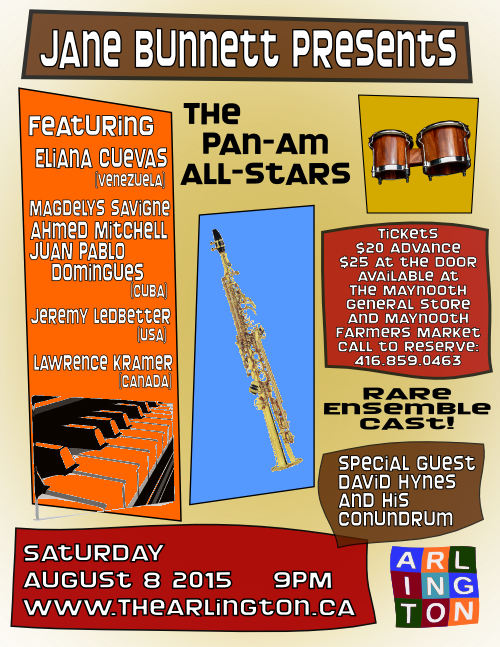 By Nate Smelle ~ Bancroft This Week

Jazz returns to Maynooth on Saturday, Aug. 8 as Jane Bunnett and the Pan-American All Stars come to town for a one night show at The Arlington. After performing together at the Pan Am games, Bunnett put together an ensemble of bandleaders and musicians to make up the Jazz supergroup. The Pan Am All Stars include: Eliana Cuevas from Venezuela, Magdely Savigne, Amhed Mitchel and Juan Pablo Dominguez from Cuba, Jeremy Ledbetter from the United States and Canadian jazzman Larry Cramer.

Adding depth to the collage of sound on this night will also be percussion artist David Hynes and his Conundrum. Hynes’s own invention, the Conundrum is basically a canoe that has been transformed into a drum. There are two Conundrums, one is in The Canadian Canoe Museum and the other will be at The Arlington on Aug. 8. It has been exhibited at private art galleries in Ottawa, Toronto and New York; and was at the Boreal Music Festival in Sudbury, Panamania at the Distillery District in Toronto, Figment Interactive Art Festval on the Toronto Island, Opened the Pan Am Torch ceremony in Peterborough, opened the Tourist Mediawriters of Canada Conference and it will be played at the Curve Lake Pow Wow in September.

Producing a one-of-a-kind sound, this handcrafted instrument is intended to be played by both musicians and the audience. Not sure whether or not they will be able to fit the Conundrum through the doors of The Arlington and on stage, Bunnett said she is looking forward to playing with Hynes even if it means they have to take their music outdoors. This wouldn’t be the first time for Bunnett has let her music flow out onto the streets of Maynooth. Musing about the time she and her husband Larry performed with the Heavyweights Brass Band at The Arlington back in August of 2013, she expressed her excitement to return to the stage, and maybe even the parking lot at the iconic local music venue.

“That was that definitely a magical night,” said Bunnett.

“There is always been something sort of magical that happens at The Arlington. That’s why we always like to play there because you never really know what is going to happen. No matter what we plan something that was not planned will happen just have to be there. The room naturally has very good sound; notes sound good in that room.”

Being aware of the acoustics of a room is very important when making music, especially during a live performance, according to Bunnett. In a way she says the room becomes an instrument itself. Such a heightened acoustic awareness of a performing space usually takes a long time to develop, however, some places, like The Arlington, just have their own special energy for the musicians and the audience to feed on.

“The best thing for we jazz musicians,” Bunnett said, “is when you walk into the club and you just feel an energy, you feel the anticipation of the audience, you feel a buzz from what’s about to happen, you pick up on that energy and that can be really inspiring for the musicians. Generally musicians are pretty sensitive people and they will pick up on the energy of the room. When you are on stage and everyone just hushes down it’s one of the greatest feelings.”

For Bunnett, making music is both a personal endeavour in creativity and a collective experience to be shared with the audience and the musicians she plays with. It’s not just about playing a great solo. She has noticed that the less she thinks about the music she is creating in the moment she is performing it, the better that music usually turns out to be.

“If you’re thinking all the time it’s very cerebral and it’s hard to let things happen,” she said.

“That’s the thing about jazz music, is that it is never ever the same; it’s always different. The conditions like the people you’re playing with, how you’re feeling that day there’s only components that come together when you are performing. Your ideas just come out; it’s kind of like speaking, trying to use your thoughts and your vocabulary to express yourself. It’s about creating a feeling for people from start to finish through sound.”

Doors open at 8 p.m. with the music beginning at 9 p.m. Tickets are available for $20 in advance at The Maynooth General Store and The Maynooth Farmers’ Market; or by calling 416.859.0463. Tickets will also be available at the door for a cost $25. To listen to, or purchase the music of Jane Bunnett visit www.janebunnett.com.
Posted by Corby's Orbit at Friday, August 07, 2015