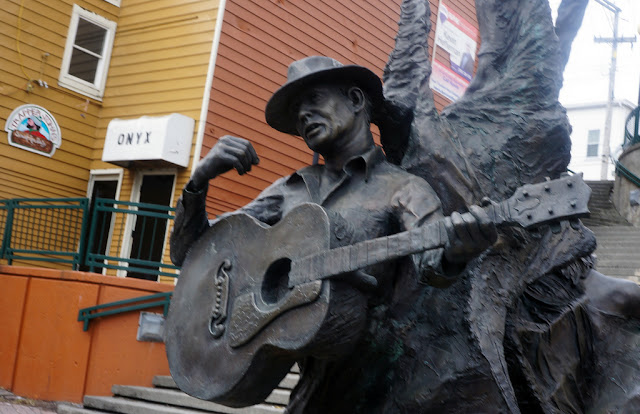 I came to Ron Hynes ten years ago, very late in his career, long after the magnificent cheerfulness of The Wonderful Grand Band and Codco had been retired to DVD, after Sonny`s Dream had won him a national ear, and near the end of his output of immaculate solo albums, full of original songs which were by turns comic, literate, sentimental and hard-nosed. Sometimes all at once.

I was booked to interview him after seeing his bio-documentary Man Of A Thousand Songs. In it, perhaps a bit too courageously, he unveiled himself as a raging but wistful abuser of all forms of humans and substances. I was terrified by the man I saw. I was meant to talk to him over the phone from Newfoundland, but he seemed totally disinterested in having a conversation that day, and not much was communicated. In later encounters he was much more hospitable, though still full of barbs and blades.

I didn`t actually get to see him play til five years after, in a small Toronto club. I had by then found a few of his disks, but I had never heard A Good Dog Is Lost. It still stings my heart and stirs something I can`t even name when he says:

``Well I can, I can hardly believe,
That a picture of a puppy drawn with a crayon
Would get to a guy like me.``
Ron Hynes' daughter Lily was going on four when events led up to the creation of this ballad about a shih-tzu belonging to Cathy Jones, of CODCO and This Hour Has 22 Minutes who at the time lived just down the road from the Hynes home in St John's. Lily drew a poster to hang in the nearby store and Ron wrote this ballad. Ron has the love of a father in the tone of his singing, and this may have something to do with the overall effect of the recording, on Get Back Change (2003).

The artistry of the song, the stammering emotion, the characterizations, the puppy P.O.V. and...and...what he does at the end (no spoilers here) combine to set this song even a notch beyond his usual standard of concise excellence. When his ragged recent biography, the dirty posthumous footnotes, the monster from Man Of A Thousand Songs, maybe even Sonny`s Dream - God Forbid - have retired to the sidelines, anyone who chances upon this song will sigh, sob and say ``This man must have truly been a monarch of song.`

Rebecca Campbell contributed a live version of the song to one of my shows and we both held on for dear life that she could get through it dry-eyed. Here it is, so beautiful.