Orbiting In Conference With The Toronto Global Music Panorama 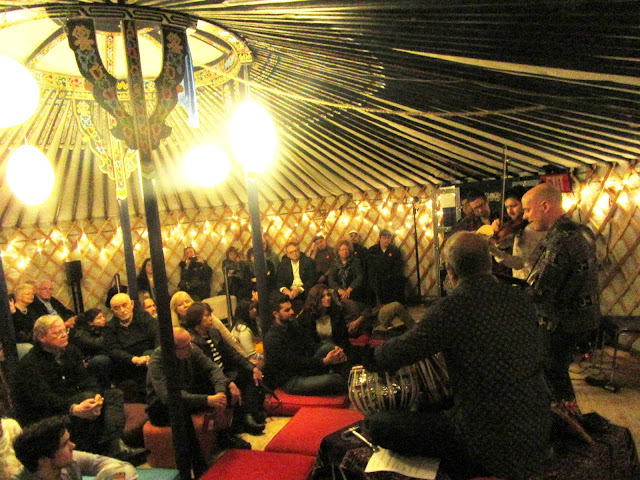 So Long Seven in the yurt
CLICK ON PHOTOS TO ENLARGE

The focus of the event was twofold. Presenting rich and stylistically diverse samples of our music in memorable venues was, of course, of primary value in proving the intense effects that vividly fresh musical experiences can have on an audience of tune seekers. The second aspect of the conference focussed on the future horizons of a synthesized and forward-thinking combined communal ethnicity. A trade forum was put in place to solve some of the traditional impasses that Canada presents to itself. With the absence of a unified presenter constituency and the long standing class-based infrastructures that give favour to established art forms, there was much to talk about and begin to creatively resolve. A presentation about the electronic enhancement and transformation of traditional sounds also drew out a strong community of learners and post-global artists. 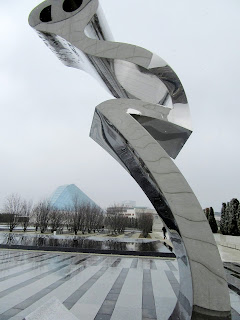 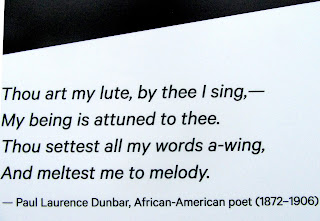 On the stormy Friday afternoon of the conference, an expedition of musical tourists congregated at the Aga Khan Museum, which is a grandly designed repository of Muslim culture at the northern end of the city. The venue extended its hospitality in the form of a superb auditorium and, in its central courtyard, a round tent typically used as a dwelling by nomads in the steppes of Central Asia: a yurt. 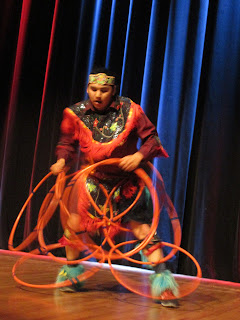 Five acts were presented in twenty-minute showcases. In front of the plush curtains of the wood-panelled concert hall, the propulsive electo-aboriginal swoops and swirling scarves and hoops of cellist Cris Derksen’s Trio, featuring a trap kit drummer and a spirit dancer creating spontaneous waves and wingspans, achieved a grandeur that left the audience spellbound. Still glowing, we were then transferred into the radial coziness of the yurt. There, we enjoyed a quick set by So Long Seven, featuring the muscular featherings of tabla master Ravi Naimpally and an almost unamplified string trio. 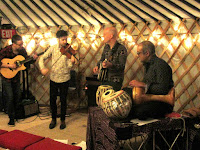 Such were the warm acoustics of the yurt that the audience, seated on cushions and small divans, could absorb the music intimately and feel the polyrhythms created by the collective interplay of the banjo and drums underpinning the keening violin and guitar blend, and the group’s occasionally vocalized syllabulary. 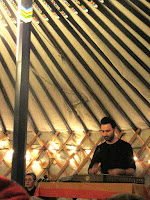 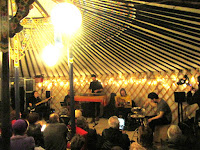 The santur playing of Iranian-born composer Sina Bathaie which followed felt very at-home and organic in the sanctuary of the yurt. An ancestor of the piano, played with delicate wands, the santur responds to Sina’s controlled bounce with rapid trills that dance like ripples in the current of the melody. It is as tangy as cinnamon over the honey flow of acoustic guitar and syrupy electric bass. Cajón accents mingle with the bass to provoke unpredictable eruptions of rhythm. 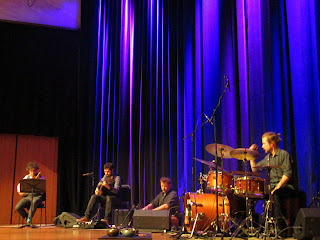 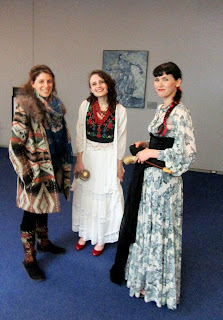 Back inside, new band Justin Gray and Synthesis were indulging in some collaborative improvisation with a heady flavouring of western groove music and a vocabulary that sounded as much like flamenco as it did raga. Toronto jazz alpha fiddle dog Drew Jurecka put things over the top frequently, soloing with and without the bow, while Justin’s brother Derek summoned mesmerizing spaces with his lyrical cymbal work and on the singing bowls for one tune. Staunch tabla connections were kept lively and secure by Autorickshaw mainstay Ed Hanley.

As Blisk began warming up for a Balkan and Slavic song fest in the yurt, I had to exit for the Orbit, but Elizabeth Szekeres at `Roots Music Canada reports: “Blisk is a synthesis of polyphonic Balkan and Slavic song, dance and movement, backed by hypnotic percussion. The band  consists of four ladies wearing colourful embroidery, hand-woven scarves, and floral skirts, embellished with funky traditional jewellery. 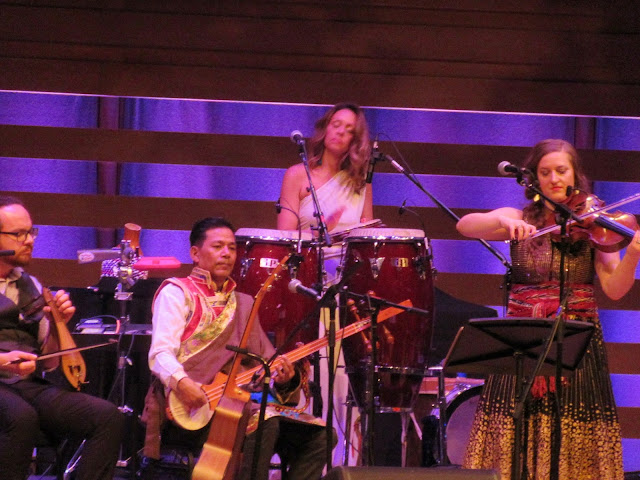 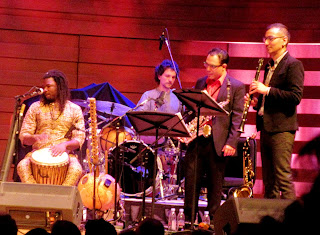 Koerner Hall had a full house
Saturday night for the first CD release party of KUNÉ, our own global orchestra, fusing eleven musical traditions (and twenty-five instruments) into an ear-spinning confection of leaping melodies and luscious timbres. 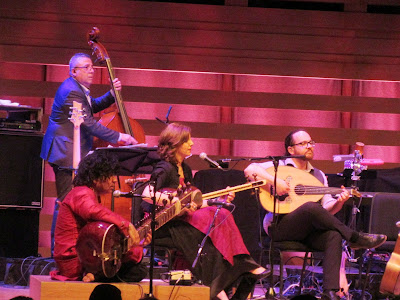 The sometimes bewildering time signatures did not keep the band from moving deep into grooves of sensual urgency, especially when under the guidance of Peruvian / Canadian Aline Morales and Montreal’s Burkina Faso expat, Lasso. Dorjee Tsering’s joyous promenade from Tibet, tar player Padideh Ahrarnejad’s blue wail from Iran, an epic stampede theme from native Canadian Alyssa Delbaere Sawchuk and various  whispers of angels and goddesses, frothing with solos - all rose into the matrices of a truly boundless expression of what seems like the planet itself willing this group on to further projections.