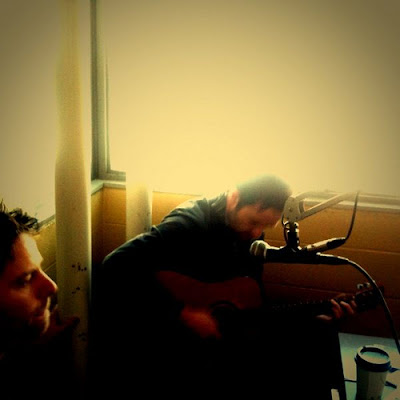 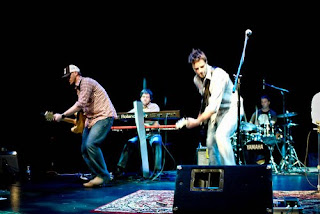 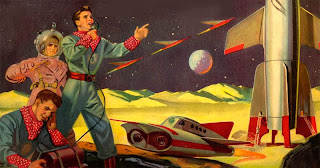 This week's show was a pod buster for realsies...Wendell Ferguson, heroically rising early in the morning after his DVD, Menage a Moi was released to an unsuspecting public at Hugh's Room, was on at 11:30. Opening act The Crooked Brothers of Winnipeg and I looked on in amazement at Wendell's stroboscopic fingerwork on a gorgeous Martin.
Then prairie mood-shifters The Wheat Pool, wafted through on the advent of their Ontario semi-tour in support of Hauntario, my crazy fave disk of 2009, and, so far, of 2010 as well. (as moving a song collection on one disk as I've ever heard. I get two sleeves full of goose bumps every time I listen). A live studio jam of This Is It ensued, along with much talking about the Junos, Edmonton culture, albums vs. records and drumming with restraint ( the word of the day it seems, as the full moon approaches and evaporates all restraint )..
At last, to bring it on back to the galley, The Sure Things, a rousing, mayhem- inducing force of nature warped out the end of the show, and previewed their new disk of dirtbag country hoots, Two Dollar Bottles. At the Dakota Tavern next Tuesday they wave farewell to Toronto on the eve of a western tour. Then, The Governor-General, selector deluxe, offered some of his crown jewels of Caribbean music, to promote his long-standing Saturday night tenure at the Embassy in Kensington. All rose to the maximum trajectory of the occasion in the rites of string
Posted by Corby's Orbit at Wednesday, March 24, 2010